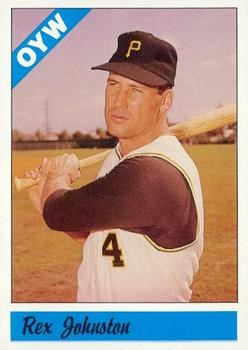 Rex David Johnston (November 8, 1937 – December 15, 2019) was an American professional athlete who played Major League Baseball for the Pittsburgh Pirates and in the National Football League for the Pittsburgh Steelers. He is the only athlete to have played for both of Pittsburgh’s iconic baseball and football teams.[1] He attended the University of Southern California, where he played both sports, standing 6 feet 1 inch (1.85 m) tall and weighing 202 pounds (92 kg) during his active career.