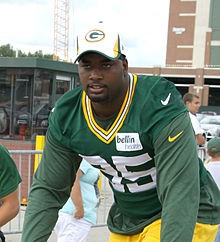 Datone Wayne Jones (born July 24, 1990) is an American football defensive tackle who is currently a free agent. He played college football at UCLA from 2008 to 2012 as a defensive end and defensive tackle. In 2008, he was named to the Rivals.com All-Pac-10 freshman team. In 2009, he earned sophomore All-America honorable mention honors from College Football News after finishing the season with 4 sacks and 11 tackles. He missed the entire 2010 season after suffering an injury to his right foot during fall camp. In 2012, he was named second-team All-Pac-12.

Jones was selected by the Green Bay Packers in the first round of the 2013 NFL Draft. In his first season, he was one of four rookies to appear in all 16 games. At the end of the 2014 season, he became the first defensive player in Packers history to register a blocked field goal and a fumble recovery in a playoff game. He was converted to outside linebacker during the 2015 season, and continued to play the position in the 2016 season. In 2017, Jones left the Packers to play with the Vikings, but was released on September 8, 2017, after being on injured reserve with a shoulder injury. He went on to play with the Detroit Lions, San Francisco 49ers, Dallas Cowboys, and Jacksonville Jaguars.